A Wing & A Prayer: An Evening of Broadway Love Songs Feb. 13

NEW YORK –– An Evening of Broadway Love Songs benefiting the historic Actors’ Temple, a New York City-based synagogue and Off-Broadway Theatre Space will take place on Monday, February 13th from 8-10 pm at The Actors’ Temple, 339 West 47th Street. As The Actor’s Temple begins to celebrate its 100th anniversary, the special Evening of Broadway Love Songs serves as the kick-off event to help raise funds for the construction of an ADA-accessible restroom facility at the Temple/theatre building as well as to raise awareness of its history and upcoming centennial. A presentation of The Florence Belsky Charitable Foundation  (Flobel), the musical evening’s host will be NYC-based theater director, actor and performance coach Lee Kasper; with multi-talented composer, arranger and pianist Josh Freilich as Musical Director and FloBel Executive Director Daniel Schneider as executive producer. Joining them will be a cast of talented performers; friends from the Broadway community, the French Woods Festival of the Performing Arts and beyond. Tickets for the benefit range from student prices to VIP level; $10 to $50, with a post-show VIP after-party. To purchase tickets visit: http://ActorsTemple.flobel.org. 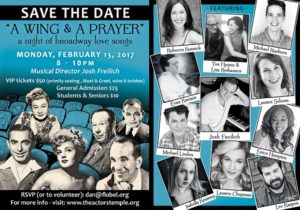 The February 13th kick-off event is designed to connect the next generation of artists with those who helped build Broadway and the American entertainment industry. In addition to raising funds, a primary purpose of the evening is to renew the Actors’ Temple and Theatre Space’ tradition of being a meeting place for young and old performers from throughout the world, who have chosen to make NYC their home.

WHAT:  An Evening of Broadway Love Songs Benefit for the Historic Actors’ Temple & Theatre Space, a kick-off event celebrating its centennial to raise funds for construction of an ADA-accessible restroom facility. The evening will connect next generation of artists with those who helped build Broadway and the American entertainment industry — renewing the 100-year-old tradition of serving as a meeting place for performers from around the world.

A WING & A PRAYER: AN EVENING OF BROADWAY LOVE SONGS

About The Actors’ Temple

The Actors’ Temple was founded in 1917 as the West Side Hebrew Relief Association. Its leaders were Orthodox Jews who owned shops in the rough-and-tumble district called Hell’s Kitchen, at the time one of the world’s busiest steamship ports. The founders borrowed a Biblical nickname for God, Ezrath Israel, “the One who assists Israel,” as the name for their benevolent little Jewish community center. They provided a place where actors could be accepted and feel at home. The actors introduced their friends to the synagogue, and the rest, as they say, is history. http://www.theactorstemple.org/about-us

About The Florence Belsky Charitable Foundation. Florence Belsky was an avid and generous supporter of the creative arts and numerous cultural institutions, including the Metropolitan Opera; the New York Public Library; Ellis Island Wall of Honor and the Metropolitan Museum. The Foundation’s mission emphasizes “Connecting People, Sharing Ideas, Empowering Each Generation to Teach the Others.”

The Broadway at Birdland Concert Series is proud to announce that Stephen Cole and David Evans musical fable, Merman’s Apprentice, is SOLD OUT.Due to an unexpected change in schedule, Mr. Kind is not able to appear. Mr. Nolte, who has appeared in the world premiere of Stephen Cole’s The Road to Qatar, has agreed to jump in and play the role of David Merrick. We are grateful

to Bill for bring his talents to the production.

In 2003, Bill starred in The Producers, putting his unique spin on the pigeon-keeping playwright Franz Liebkind, a role he performed on Broadway, across the country, and in Japan. Bill’s other Broadway credits are La Cage Aux Folles, Jane Eyre, A Christmas Carol, The Secret Garden, Me and My Girl, Amour and his debut in Cats. Bill’s Off Broadway/Regional career includes, The Most Happy Fella, Damn Yankees, Sweeny Todd, Fanfare and Annie 2 at the Kennedy Center. As a cabaret/concert artist, Bill has appeared at Iridium Jazz Club, Anyone Can Whistle and Sail Away at Carnegie Hall, Lyrics and Lyricists, Cole Porter Songbook at the Kennedy Center and All of Me and On Broadwayon the Seaburn SPIRIT Cruise Lines.

Merman’s Apprentice is a new musical fable with Book & Lyrics by Stephen Cole (After the Fair, The Road To Qatar, Night of the Hunter) and Music by David Evans (Birds of Paradise, Children’s Letters To God). Bistro Award Winner Klea Blackhurst will appear as Ethel Merman, with a cast lead by Tony nominee Anita Gillette as Ethel’s Mom, with Bill Nolte as David Merrick, J.P. Benjamin (Broadway’s current Wizard in Wicked) as Ethel’s Pop and 13 year-old Elizabeth Teeter, who is currently playing Young Queen Elizabeth in The Audience on Broadway, will play Muriel Plakenstein: Merman’s Apprentice. Additional cast members include Adam Grupper, Eddie Korbich and Brian Charles Rooney.

Synopsis: Time: the 1970’s. The Golden Age of Musical Theatre is drawing to an end, although twelve-year-old Muriel Plakenstein doesn’t know that. So she runs away from home to become a Broadway star, meets the Queen of Broadway Ethel Merman, who takes her to a Hello, Dolly! rehearsal, where they sing together. When legendary producer David Merrick hears the kid, he decides to star Muriel in the first all-child cast of Dolly! Naturally, Merman takes her under wing to teach her the ropes of being a star…making little Muriel Plakenstein Merman’s Apprentice. It’s a tuneful, original smart, funny, warm, new musical comedy about childhood, parents, Broadway and Ethel Merman. Who could ask for anything more?

Broadway show’s backers are having a ball with all the cross-promotions.

Robyn Goodman was immediately interested when approached about producing Rodgers + Hammerstein’s Cinderella on Broadway for the first time. Just thinking about the story’s romance and score made her giddy. And then, of course, there were the marketing opportunities.

“Cinderella is a beloved brand,” said Ms. Goodman, who won Tony Awards for producing Avenue Q and In the Heights. “I understood what an advantage that was.”

But like good fairy godmothers, she and her partners sprinkled magic on their baby. A Broadway veteran updated the story to carry a more empowering message for girls. A five-time Tony winner designed the sumptuous costumes. And executives conjured up a marketing campaign with Stuart Weitzman, the New York Palace hotel and Brooks Brothers, among others.

The show even permits Prince Charmings to propose to their beloveds onstage after performances (there’s been one so far—she said yes—and another is expected next month). The production will also arrange princess-themed parties.

“The show is singular in how it has taken the brand’s assets and extended them,” said Susan Lee, chief marketing officer at the Nederlander Organization, a theater owner that is not involved in the show.

The marketing appears to be working as the show prepares to open March 3. For the week ended Feb. 17,Cinderella previews were essentially sold out and generated an impressive $1.1 million in ticket sales. However, the spring season is just beginning, and no other new musical has started previews. Competition will intensify in the coming weeks.

Once upon a time, marketing Broadway shows consisted of taking out ads and hiring a press agent. To make a splash now, shows must go beyond that, a trend that has intensified in recent years with the explosion in the number of media outlets. Producers want to promote their plays in nontraditional venues to broaden audiences beyond regular theatergoers. They create buzz for straight plays by casting big movie stars and use tactics like tie-ins for musicals.

This season the breadth of the partnerships is on full display. The producers of Motown: The Musical joined forces with Chrysler for the first-ever national TV ad campaign for a Broadway musical. Meanwhile, the team behind Annie orchestrated a host of cross-promotions with companies ranging from Pedigree Petfoods to Dylan’s Candy Bar. More are on the way.

“You want to get your brand off just the theater pages,” said Betsy Bernstein, president of BDB Marketing, which promotes Annie.

That’s easier for well-known shows with organic tie-in potential, like Cinderella and shoes. The producers ofMatilda, a mega-hit in London being imported to Broadway, have no co-promotion deals yet. That’s because American audiences aren’t very familiar with the Roald Dahl novel on which the musical is based. Matilda‘s advance sales are a result of traditional marketing and chatter by theater aficionados.

“Matilda is essentially unknown here,” said Andre Ptaszynski, one of the producers. “That’s not a good basis for a co-promotion.”

In contrast, Cinderella is perhaps the most famous fairy tale of all. Plus, it has built-in Broadway credentials because Richard Rodgers and Oscar Hammerstein wrote the original book, music and lyrics. The duo created it for CBS, which aired the live, one-time performance featuring Julie Andrews in 1957. It was an instant hit, and two TV movie versions followed, although the pair never realized their dream of bringing it to Broadway.

The combination of a treasured tale told with Broadway legends’ music drew in partners.

“I don’t see any downside when you are talking about Cinderella by Rogers and Hammerstein,” said Susan Duffy, chief marketing officer of Stuart Weitzman.

A partnership between a shoe company and Cinderella was practically preordained. Mr. Weitzman personally co-designed the show’s glass slipper and created a line of Cinderella-inspired footwear. Promotions emailed to customers and used on Stuart Weitzman’s website have included the show’s tagline, “Glass slippers are so back,” as well as “Cinderella is proof that a shoe can change your life.”

“This was a perfect collaboration,” said Ms. Duffy.

The shoes were introduced only a few weeks ago, so it is too soon to judge their sales potential. However, the New York Palace has seen a tangible benefit from its partnership with Cinderella, its first promotion with a Broadway show, said Brian Honan, the hotel’s director of sales and marketing. He said the property has sold about 200 Cinderella weekend packages, which include a chocolate shoe and themed cocktails.

“If the show’s a hit, we could do this for the next five years,” said Mr. Honan.

That would delight Ms. Goodman and her colleagues, who are continuing to work on new promotions forCinderella. A partnership with a new line of wines by Diageo is expected to be announced soon, for example.

They haven’t figured out how much of its sales have been generated by its various tie-ins, but, Ms. Goodman said, “obviously they are working, because we are doing well.”

The show certainly has the makings of a fairy-tale ending: a famous story, beautiful music, a Tony-nominated star in Laura Osnes, a Tony-nominated writer in Douglas Carter Beane and costumes by famed designer William Ivey Long.

Still, there is the potential for evil stepsisters in the form of bad reviews and damaging word-of-mouth to crush all the hard work. For musicals like Cinderella, the latter is more of a threat, but Ms. Goodman said so far audiences have been largely enchanted.

“I don’t think bad reviews would kill us,” she said. “I think we’re getting it out how magical it is.”

A version of this article appears in the February 25, 2013, print issue of Crain’s New York Business as “Cinderella stages marketing magic”.