November ignites awareness for Diabetes, Giving Tuesday, Health, Writing and more. We give thanks this month on Thanksgiving Day and Giving Tuesday, but November is also host to many more wonderful awareness observances in the health, arts and social arenas. 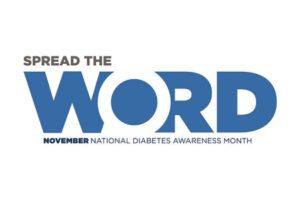 NATIONAL DIABETES MONTH is observed every November so individuals, health care professionals, organizations, and communities across the country can bring attention to diabetes and its impact on millions of Americans.

This year, the National Diabetes Education Program theme is: Managing Diabetes – It’s Not Easy, But It’s Worth It. This theme highlights the importance of managing diabetes to prevent diabetes-related health problems such as heart attack, stroke, kidney disease, vision loss, and amputation. The theme also serves as a reminder to people who may be struggling with the demands of managing diabetes that they are not alone.

More than 30 million people in the United States have diabetes, but 1 out of 4 of them don’t know they have it.

– There are three main types of diabetes:  type 1, type 2, and gestational diabetes (diabetes while pregnant, which can put the pregnancy and baby at risk and lead to type 2 diabetes later).

The theme for WDD 2017 is Women and Diabetes. The campaign will promote the importance of affordable and equitable access for all women at risk for or living with diabetes to the essential diabetes medicines and technologies, self-management education and information they require to achieve optimal diabetes outcomes and strengthen their capacity to prevent type 2 diabetes.

There are currently over 199 million women living with diabetes and this total is projected to increase to 313 million by 2040. Gender roles and power dynamics influence vulnerability to diabetes, affect access to health services and health seeking behavior for women, and amplify the impact of diabetes on women. — International Diabetes Federation

NO-SHAVE NOVEMBER. Every November, this web-based nonprofit organization hosts a month-long campaign, where participants skip shaving and grooming for the entire month in order to stimulate conversation and raise cancer awareness and funds for prevention, research and education.

The goal of No-Shave November is to grow awareness by embracing your hair — which many cancer patients lose — and letting it grow wild and free. The money usually spent on grooming can then be donated to the cause.

If you don’t want to be hairy for the month, you can still show your love for this worthy cause by supporting a friend who is partaking.

NATIONAL NOVEL WRITING MONTH (NaNoWriMo) – One of my favorite observances. Held every November since 1999, this nonprofit sparks the creative writing gene in us all — empowering and encouraging vibrant creativity around the world.

On November 1, participants begin working towards the goal of writing a 50,000-word novel by 11:59 PM on November 30. Valuing enthusiasm, determination, and a deadline, NaNoWriMo is for anyone who has ever thought about writing a novel. 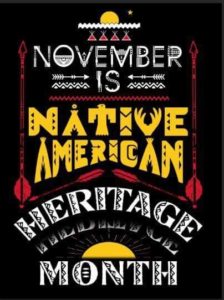 NATIVE AMERICAN HERITAGE MONTH  Also referred to as American Indian and Alaska Native Heritage Month. The month is a time to celebrate rich and diverse cultures, traditions, and histories and to acknowledge the important contributions of Native people. Heritage Month also aims to educate the general public about tribes, to raise awareness about the unique challenges Native people have faced both historically and in the present, and the ways in which tribal citizens have worked to conquer these challenges.

Founded in 1944, the National Congress of American Indians (NCAI) is the oldest, largest, and most representative American Indian and Alaska Native organization serving the broad interests of tribal governments and communities. 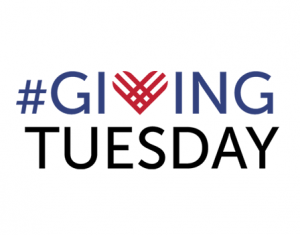 GIVING TUESDAY. November 28th.  Now in its sixth year, this awareness initiative is celebrated on the Tuesday following Thanksgiving (in the U.S.) and the widely recognized shopping events Black Friday and Cyber Monday, #GivingTuesday kicks off the charitable season, when many focus on their holiday and end-of-year giving. Since its inaugural year in 2012, #GivingTuesday has become a movement that celebrates and supports giving and philanthropy with events throughout the year and a growing catalog of resources. 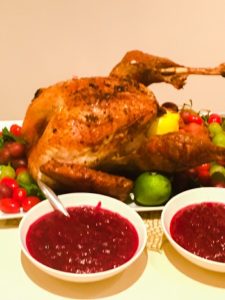 November is a very giving time of the year. We have lots to give thanks for and what better time than during the annual Thanksgiving holiday. So many causes, observances and creative challenges this month. — Abbe is Socially Sparked™ Tweet @sosparkednews & @asparks01