Sugar Blue a soaring voice for the blues 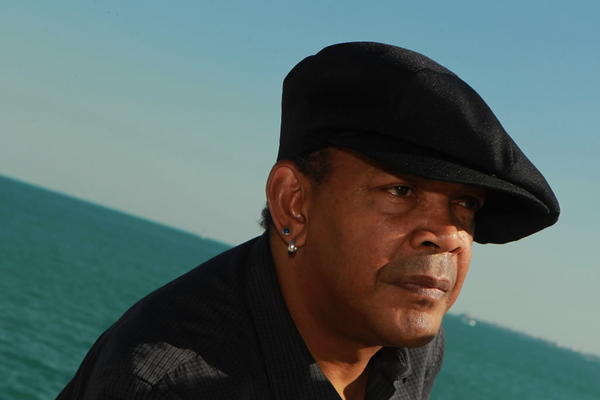 Last May, during a conference on “Race, Gender & the Blues” at Dominican University, the master harmonica player Sugar Blue addressed the theme in an impassioned, unforgettable soliloquy.

Lamenting that blues increasingly has been expropriated by white performers and entrepreneurs, Blue proclaimed that he refused to stand by and let it happen.

“This is a part of my heritage in which I have great pride,” he said, reading his prose-poem to a crowd of scholars, musicians and aficionados. “Paid for in the blood that whips, guns, knives, chains and the branding irons ripped from the bodies of my ancestors as they fought to survive the daily tyrannies in the land of the free, where some men were at liberty to murder, rape and lay claim to all and any they desired.

“From this crucible the blues was born, screaming to the heavens that I will be free, I will be me.

“You cannot and will not take this music, this tradition, this bequest, this cry of freedom and dignity from bloodied, unbowed heads without a struggle.”

No statement at the conference matched the ferocity or eloquence of this one, and the enthusiasm of the audience response suggested Blue had put words to what many attendees were feeling. Part of the power of his statement owed to his standing in the field, for he has lived the blues life since the dawning of his career, in the 1960s. He has been heard around the world, most famously via his solo in the Rolling Stones hit “Miss You,” and he has battled addiction and its deleterious effects on his career.

Clean for more than a decade, he says, Blue remains as committed to enlightening listeners about the black identity of the blues as he was during the Dominican University conference, when his prose-poem captivated listeners.

“I wrote it after Honeyboy passed,” says Blue, 62, referring to the Delta blues legend David “Honeyboy” Edwards, who had spent more than half a century in Chicago before dying last year at 96.

“It seemed to me that there are a lot of people that love the blues but know little about its origins and have no concept as to how closely it is tied to the black experience,” adds Blue, who will mark the release of his newest album, the two-CD set “Raw Sugar Blue: Live” with shows Friday and Saturday at Rosa’s Lounge, on West Armitage Avenue.

“And it seemed to me that it’s very, very important to make a statement about that … because this (music) is of the black experience and always will be. And the fact that it has become universal is a wonderful thing, because it says how important and influential and powerful this music is.

“But it must be remembered that though you are welcome to the house, do not try and take the home. Come on in, visit, enjoy, do your thing. But remember whose house you’re in.”

Like his words, Blue’s art speaks fervently of black musical culture, but not only of the blues. A great deal of jazz sophistication courses through his harmonica playing, the legacy of his childhood and early career in Harlem, where he was born and raised. His mother’s tenure as a dancer at the Apollo Theater and later a clubowner there, as well as his stepfather’s friendships with various musicians, meant that jazz and blues giants routinely whiled away the hours in the family home. The towering jazz saxophonist Dexter Gordon, the veteran blues singer Bobby “Blue” Bland and others populated Blue’s childhood (he was born James Whiting).

And though Blue was largely self-taught on harmonica, the influence of jazzmen such as saxophonists Buddy Tate and Paul Quinichette (both famously of the Count Basie band), guitarist Tiny Grimes and others in New York convinced him that he needed to hone his technique to a high polish.

A period in Paris starting in the late 1970s deepened his jazz connections, enabling him to work with no less than saxophonists Stan Getz and Steve Lacy and vibist Lionel Hampton, as well as hooking him up with the Stones for the celebrated “Miss You” track and others.

By the early 1980s, Blue sought advice from expat blues pianist Memphis Slim and realized he needed to move to ground zero for the blues: Chicago.

“He said, ‘Well, son, it’s like this,’ “remembers Blue. ” ‘You played with all the jazz cats. Now you played with the top rock-and-roll band in the world. And now anything you’ll do in Paris will be down. You can’t go up from there.

” ‘If you were older, I’d suggest you stay here and rest on your laurels, play out your time. But you’re a young fellow. I think you should go to Chicago and you should go meet and hang out with some of these great blues harmonica cats. You can play, no question. But there are things these old-time players can teach you about the blues that you can’t get on records, because this music is passed from man to man and from heart to hand.’ ”

A couple months later, Blue was in Chicago, playing and touring in Willie Dixon’s band, eventually sitting in with Junior Wells, James Cotton, Big Walter Horton (toward the end of his life) and other pioneers. But Blue also “got wrapped up in an addiction that really almost destroyed me,” he says. “At some point, I realized that if I stayed her, I would die here.”

So in the late 1990s Blue signed up for the Crossroads Centre Antigua that Eric Clapton established, he says, got cleaned up, returned to Chicago and – just like Dexter Gordon’s character in the classic jazz film “‘Round Midnight” – fell right back into his old habits. A subsequent hiatus in Switzerland restored Blue’s his health and persuaded him to stay for awhile in Europe, where in 2004 he befriended the bass player who would become his companion in 2005 and his wife earlier this year, Ilaria Lantieri.

It was Ilaria, a medical doctor who became smitten with the blues and decided to devote her life to it, who persuaded Blue not only to return to recording a few years ago but to do it in Chicago. Since then, the two have been inseparable, touring the country in their camper, playing roughly 80-100 dates a year in the U.S. and around the world.

Though they own a house in Memphis, they’re on the road so much that they rent it out and still regard Chicago as their home base.

“We’re doing good, but we always like to do better,” says Lantieri of their performance schedule. “We have a steady trend of growth. We do one or two tours a year in Europe, we just did South America, we’re negotiating for Asia. Our bags are always packed.”

Both remain devout about the blues.

“When it gets down to this music, it’s the forerunner of jazz, R&B, funk, fusion, rap and all the rest of it,” says Blue.

“As Willie Dixon said so well: ‘The blues are the roots and the rest are the fruits.’ ”